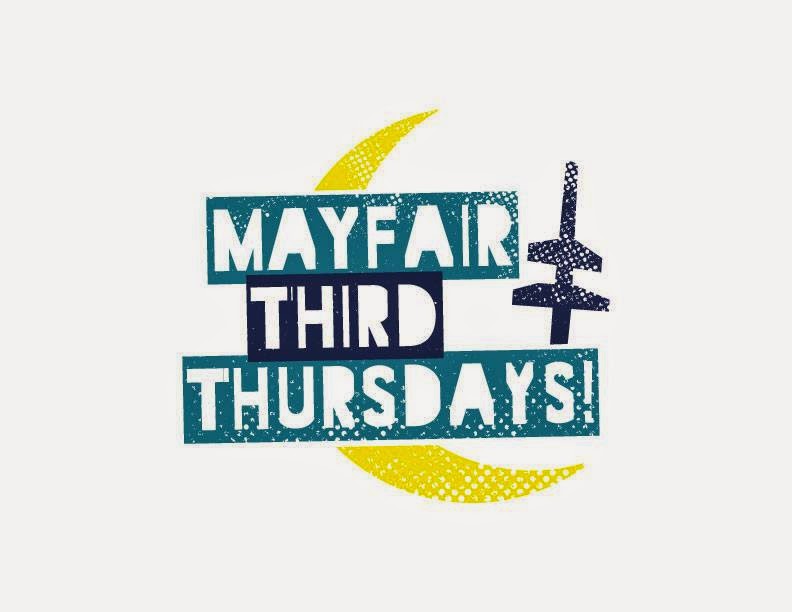 Our new logo for Third Thursday courtesy of local Mayfair graphic designer, Mike Ennis. Don't forget! Third Thursday is THIS Thursday, 7/17 from 5pm to 9pm at the intersection of Frankford Ave and Ryan Ave! We'll have crafters and vendors, DJ Jim Barber, produce from Cappriotti Brothers, food trucks Undgrnd Donuts, Brotherly Grub, Jaelyn's Lil Bit of Everything and a free Ice Cream Social starting at 6pm sponsored by the MCDC, Mayfair Business Association and Mayfair Town Watch while supplies last. See you then!!
Posted by Joe DeFelice at 2:19 PM 15 comments:

I'm sure by now that most of you have seen the story in today's Daily News featuring the 15th District Split. Dan Geringer and I spoke for hours and I couldn't emphasize enough that this is a group effort with all of our neighborhoods working together towards a common goal.

Great job and special thanks to Councilman Henon and his staff for their help and support of the Split, and to Harry Engasser from Bridesburg, and Georgeanne Huff-Labovitz from Tacony for helping to put this story together! I'm hopeful that today's story will help us gain momentum, and move us forward towards better police protection for all of our neighborhoods.
NE Philadelphians tell police: 'Split the 15th District!'

This was a win for everyone!

From this one zoning issue came a new Civic Association (PROPS to Wissinoming neighbors), a working relationship between neighbors, developers, and Councilman Bobby Henon's office (PROPS to Bobby Henon, Lisa Marie Deeley and staff), and the opportunity for the Mayfair Civic Association and it's members to help put it all together! As crazy as it all started, the outcome was awesome!

Thanks Bill Kenny for capturing the story!

There has been a lot of discussion lately about the 15th District Split and the genesis of the idea, so I wanted to take a moment to share with you all how it all came to be.

The Mayfair Civic Association received numerous phone calls and emails from neighbors complaining about the lack of police protection in our neighborhood, and that is what motivated us to look for a possible solution. Our neighbors feel either unprotected, or under-protected. Hearing the same battle cry again from every Captain that has been in the 15th for as long as we could remember is where the idea of splitting the district came from. Time and time again we'd hear "The 15th is the biggest and busiest district in the city". Since the size of the district was always the reason cited for the lack of police coverage or service, we set to hopefully change that.
Doing some research and meeting with local leaders from every neighborhood within the 15th, we found that this has been an issue within our neighborhoods for over 25 years - Since 1989!

In 1989 after the Civic's rallied, and residents were happy to get more police within their neighborhoods, however sadly since then the 15th has once again become under served, and under protected. Learning a lesson from the past, we decided that splitting the 15th into two smaller districts was a better solution. We would then always have X amount of police protection within each district, as opposed to having our police force running back and forth leaving neighborhoods at times without any protection at all. We now know that any police that we are given will only be a temporary solution to a permanent problem.

With respect to the budget.

With respect to a new district.

We've discussed the possibility of perhaps using a portion of Holmesburg Prison, and I believe Councilman Henon is looking into that as a possibility. The thought being that we already own it, and it's already built to house prisoners. Yes there would be some costs associated with the retrofit, however they would be small compared to building an entirely new building.

Everybody agrees that Philadelphia needs more police officers - There is no disputing that. The idea here is to split the 15th in half, and then concentrate on filling both halves up.
For more information or to sign Councilman Bobby Henon's petition, please visit the following website: Split the 15th
Donny SmithMayfair Civic AssociationPresident215 514 4010"Mayfair -  An Awesome Place to Live!"
Posted by Joe DeFelice at 3:00 PM 8 comments: