At last night's meeting, President Joe DeFelice officially stepped down from his role as President and appointed Donny Smith to fill remainder of the term.  Upon this act, President Smith appointed the following officers for the upcoming two years with elections to take place in November 2015: 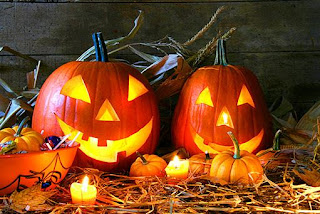 The Friends of Mayfair Memorial Playground are seeking sponsors for the 2nd Annual Halloween Spooktacular and Grand Re-Opening - such sponsor would donate $50 and would be able to give candy out to each child and literature about their business to each parent and their names would appear on any and all promotional items. Please contact mayfairmemorialplayground@yahoo.com for more information. https://www.facebook.com/events/723877097638248/
Posted by Joe DeFelice at 2:30 PM 25 comments:

All,
Dawn Tancredi, our attorney for the Methadone Clinic dispute, has moved on from Mattioni, Ltd and is now a Partner with  Obermayer, Rebmann, Maxwell and Hippel, which will now lead us in fighting this ongoing legal battle to preserve our neighborhood.    Checks should be made payable to Obermayer, Rebmann, Maxwell and Hippel, One Penn Center, 19th Floor, 1617 John F. Kennedy Blvd., Philadelphia, PA 19103-1895.  We are asking each household to donate $10.  If you would like to aid in this effort, please email mayfaircivicassociation@yahoo.com or contact Holmesburg Civic Association at holmesburgcivic@gmail.com.

DONATE NOW TO THE FIGHT AGAINST THE METHADONE CLINIC

www.mayfaircivicassociation.com
Posted by Joe DeFelice at 9:48 AM 3 comments: 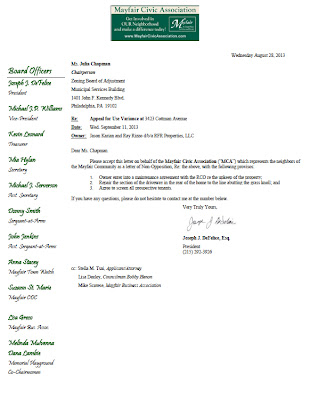 Dear Ms. Chapman
Please accept this letter on behalf of the Mayfair Civic Association (“MCA”) which represents the neighbors of the Mayfair Community as a letter of Non-Opposition, Re: the above, with the following provisos:

1.     Owner enter into a maintenance agreement with the RCO re the upkeep of the property;
2.     Repair the section of the driveway in the rear of the home to the line abutting the grass knoll; and
3.        Agree to screen all prospective tenants.