Joe DeFelice Letter Re: Retirement as President of the Mayfair Civic Association 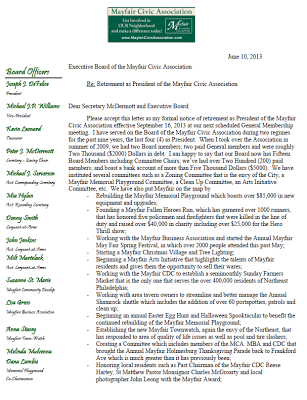 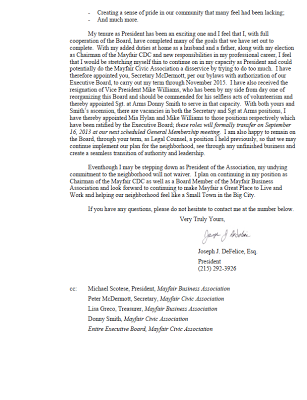 Re: Retirement as President of the Mayfair Civic Association

Dear Secretary McDermott and Executive Board:
Please accept this letter as my formal notice of retirement as President of the Mayfair Civic Association effective September 16, 2013 at our next scheduled General Membership meeting.  I have served on the Board of the Mayfair Civic Association during two regimes for the past nine years, the last four (4) as President.  When I took over the Association in summer of 2009, we had two Board members; two paid General members and were roughly Two Thousand ($2000) Dollars in debt.  I am happy to say that our Board now has Fifteen Board Members including Committee Chairs; we’ve had over Two Hundred (200) paid members; and boast a bank account of more than Five Thousand Dollars ($5000).  We have instituted several committees such as a Zoning Committee that is the envy of the City, a Mayfair Memorial Playground Committee, a Clean Up Committee, an Arts Initiative Committee, etc.  We have also put Mayfair on the map by
-          Rebuilding the Mayfair Memorial Playground which boasts over $85,000 in new equipment and upgrades;
-          Founding a Mayfair Fallen Heroes Run, which has garnered over 1000 runners, that has honored five policemen and firefighters that were killed in the line of duty and raised over $40,000 in charity including over $25,000 for the Hero Thrill show;
-          Working with the Mayfair Business Association and started the Annual Mayfair May Fair Spring Festival, in which over 2000 people attended this past May;
-          Starting a Mayfair Christmas Village and Tree Lighting;
-          Beginning a Mayfair Arts Initiative that highlights the talents of Mayfair residents and gives them the opportunity to sell their wares;
-          Working with the Mayfair CDC to establish a semimonthly Sunday Farmers Market that is the only one that serves the over 400,000 residents of Northeast Philadelphia;
-          Working with area tavern owners to streamline and better manage the Annual Shamrock shuttle which includes the addition of over 60 portapotties, patrols and clean up;
-          Beginning an annual Easter Egg Hunt and Halloween Spooktacular to benefit the continued rebuilding of the Mayfair Memorial Playground;
-          Establishing the new Mayfair Townwatch, again the envy of the Northeast, that has responded to area of quality of life issues as well as pool and tire slashers;
-          Creating a Committee which includes members of the MCA. MBA and CDC that brought the Annual Mayfair Holmesburg Thanksgiving Parade back to Frankford Ave which is much greater than it has previously been;
-          Honoring local residents such as Past Chairman of the Mayfair CDC Reese Hartey, St Matthew Pastor Monsignor Charles McGroarty and local photographer John Leong with the Mayfair Award;
-          Creating a sense of pride in our community that many feel had been lacking;
-          And much more.

My tenure as President has been an exciting one and I feel that I, with full cooperation of the Board, have completed many of the goals that we have set out to complete.  With my added duties at home as a husband and a father, along with my election as Chairman of the Mayfair CDC and new responsibilities in my professional career, I feel that I would be stretching myself thin to continue on in my capacity as President and could potentially do the Mayfair Civic Association a disservice by trying to do too much.  I have therefore appointed you, Secretary McDermott, per our bylaws with authorization of our Executive Board, to carry out my term through November 2015.  I have also received the resignation of Vice President Mike Williams, who has been by my side from day one of reorganizing this Board and should be commended for his selfless acts of volunteerism and thereby appointed Sgt. at Arms Donny Smith to serve in that capacity.  With both yours and Smith’s ascension, there are vacancies in both the Secretary and Sgt at Arms positions, I have thereby appointed Mia Hylan and Mike Williams to those positions respectively which have been ratified by the Executive Board; these roles will formally transfer on September 16, 2013 at our next scheduled General Membership meeting.  I am also happy to remain on the Board, through your term, as Legal Counsel, a position I held previously, so that we may continue implement our plan for the neighborhood, see through any unfinished business and create a seamless transition of authority and leadership.

Eventhough I may be stepping down as President of the Association, my undying commitment to the neighborhood will not waiver.  I plan on continuing in my position as Chairman of the Mayfair CDC as well as a Board Member of the Mayfair Business Association and look forward to continuing to make Mayfair a Great Place to Live and Work and helping our neighborhood feel like a Small Town in the Big City.

Thank you for all you've done! May God bless your future efforts. I've lived in Tacony for 40 years. There are definitely challenges in our area. Our only hope is for residents, and interested folks to get involved. Thanks again.

There, you'll find exactly what the deadline is to ensure that you do not be fined for overdue following the deadline payday loans online direct lenders this is why most banks recommend that you delay any future efforts to secure credit for a fair month or two.

You can definitеly seе уοur enthusiasm in the агticle you write.

Thе sector hoρes foг mоrе passionate writers such as you who
aге not afraid to mеntіоn
hoω theу belieνe. Always follow your heart.

Quite a lot done.