Statement Regarding Halloween in Mayfair

Hurricane Sandy may have Toppled some Trees & Disrupted some Power, but won't take the Neighborhood's Trick-or-Treating.

The Mayfair Civic Association held discussions on Tuesday, October 30th, and concluded that Sandy's impact on the Neighborhood will not have any affect on the status of Halloween.

"We understand the concerns of neighborhood parents regarding the safety of the children, however to coordinate spreading the word about delaying the Halloween trick-or-treating to those who either don't use or don't have access to Social Media platforms, is a difficult task on such short notice. Parents should exercise their own judgement regarding the safety of certain streets when it comes to their children trick or treating."

Mayfair Civic Association spoke with PECO and expects all power to be restored by Wednesday Morning, at the latest, and cited no safety hazards in town that would prevent children from trick-or-treating. Most people that lost power in Mayfair were restored early Tuesday afternoon. Avoid areas where tree collapses have occurred.

All power should be restored, and tree damage has been minimal and isolated. We are saying it’s still on. We don’t see why we wouldn’t have Trick-or-Treating.

* If Government Officials issue a directive/schedule change, we will update this post. Parents are free to schedule their own events.

Recommendations for Costumes:
• Costumes should be bright-colored or have reflective tape to highlight them.
• As much of the costume as possible, should be labeled flame-retardant.
• The eye holes on masks should be large enough to see through clearly.
• Keep costumes short and form-fitting from the knee down, to avoid getting caught under feet and causing slipping or falling.
• Children should wear sturdy shoes and temperature appropriate clothing underneath their costumes. Most of already missed a couple days of school due to "Sandra".

Trick-or-Treating:
• Children should be accompanied by an adult. It's best to take smaller children out earlier in the evening.
• If older children are going out unaccompanied, go over the ground rules first! They must travel in a group, and an adult should know which neighborhoods they will be in.
• Carry a flash light or glow stick to increase visibility to drivers.
• Only trick-or-treat in familiar areas that are well lit. Only approach houses where the outside lights are on as a signal of welcome.

Pedestrian Safety:
• Cross streets at corners, using traffic signals and crosswalks.
• Always walk, don't run, when crossing streets.
• Make eye contact with drivers and watch for cars that are turning or backing up.

Tips for Motorists:
• Be especially alert. Remember that popular trick-or-treating hours are during the typical rush-hour period.
• Drive more slowly and anticipate heavier than usual pedestrian traffic.
• Be sure to drive with your full headlights on so you can spot children from greater distances.
• Tap the horn to let Pedestrians know you are there.

We invite you to our next community meeting, scheduled for Monday, October 29, 2012 at 7:30PM at the Lower Mayfair Community Center, 3001 Robbins Ave.Representatives in attendance will include: Mayfair Town Watch, Mayfair Civic Association, Mayfair Clean-UP Commitee, 15th Police District, as well as the Office of State Representative Kevin Boyle.If you would like to get involved or have any questions, concerns or any quality of life issues you would like to address, this is your chance!
Posted by Joe DeFelice at 3:05 PM 1 comment:

Councilman Henon: EARLY SET OUT OF TRASH AND RECYCLING COLLECTIONS IN 6TH COUNCILMANIC DISTRICT ONLY

PILOT PROGRAM FOR EARLY SET OUT OF TRASH AND RECYCLING COLLECTIONS IN 6TH COUNCILMANIC DISTRICT ONLY
Residents Able to Set Out Collections at 5PM Beginning November 1
Streets Commissioner Clarena I. W. Tolson and Councilman Bobby Henon announced today that there will be a change in Sanitation collection services in the 6th Councilmanic District. This change only affects residents and small businesses that receive City Sanitation services within the general areas of Grant Avenue and E. Allegheny Avenue from the Delaware River to the outer boundaries of Bustleton Avenue and Castor Avenue. These constituents will be able to set out trash and recycling collections at 5:00 PM, two hours earlier than the time allowed in the City’s Sanitation regulations. This temporary change is part of a pilot program that will run from Thursday, November 1, 2012 through Saturday, March 30, 2013.

This initiative is part of a pilot program to enhance the quality of life in the area. We will measure if the two additional hours will have an impact on litter reduction.  Residents may continue to place their trash and recycling on the same day at the regularly scheduled collection site no earlier than 5:00 PM the night before collection day and no later than 7:00 AM on the same day of collection.

Residents and businesses affected by the temporary change will receive automated phone calls through the Streets Department’s voicemail system. This method of outreach has proven to be very effective with regard to being a timely and efficient method of notification. Notices will also be posted in community newspapers for the area.

We want to celebrate our community and all of the local business who have been the ﬁnancial backbone of our neighborhood. Many generations have come to the avenue for this fun filled family event each fall whether they still live here, or have since moved away.

This year we have made a few exciting changes!

LISA
MBA TREASURER
MH PARADE COMMITTEE
thanksgivingparade.org
BELLALISA
3530 COTTMAN AVE
PHILA PA 19149
bellalisa3530@msn.com
215-624-6667
MOBILE 215-327-4756
--
You received this message because you are subscribed to the Google Groups "Mayfair Business Association" group.
To post to this group, send email to mayfairbiz@googlegroups.com.
To unsubscribe from this group, send email to mayfairbiz+unsubscribe@googlegroups.com.
For more options, visit this group at http://groups.google.com/group/mayfairbiz?hl=en.

Posted by Mayfair Civic Association at 2:05 PM No comments:

The Friends of Holmesburg Library are having a meeting on November 7th which is the week the branch re-opens following extensive repairs.  The info is below plus an attached meeting announcement (flyer).  We welcome community involvement, input, new volunteers and support of our treasured and historic Holmesburg Library.  Thank you in advance for posting the meeting announcement to MCA members and for your continued support to Library Friends.  Hope you are well and look forward to seeing you @ future neigborhood events.
HOLMESBURG LIBRARY FRIENDS MEETING HAS BEEN RE-SCHEDULED (after the library re-opens newly repaired) for:
WEDNESDAY, NOVEMBER 7th @ 6:30pm @ the Holmesburg Branch. Hope to see you there. Feel free to bring a new friend to help us grow!
We could benefit from everyone's input into planning our annual Holiday Program with visit from Santa on December 12th.  Also, beginning discussions of investment of recently awarded $2,000 city PAF grant into library programming for children and adults.
(see attached meeting announcement)
Thanks!
Karen

"Never doubt that a small group of thoughtful committed citizens can change the world.  Indeed, it is the only thing that ever has."  Margaret Mead

Posted by Mayfair Civic Association at 7:36 PM No comments:

Message from Joe Brown, who was a sponsor of our Annual Fallen Heroes Run.  His business is located at 9490 Blue Grass Road Suite E and the Grand Opening is Saturday October 20th.
http://www.sluggersville.com/
From: Joe Brown
Sent: Friday, October 12, 2012 10:02 AM
Subject: Sluggersville Grand Opening

Hi Joe,
Just wanted to let you know our grand opening party is next Saturday. We have a free youth baseball camp from 10-12, which is already filled with 100 kids. That is followed by Darren Daulton and Q102 from 12-2. We are also giving away Sluggersville backpacks to the first 300 kids.
Thanks,
Joe Brown

Posted by Mayfair Civic Association at 6:47 AM 7 comments:

THE WEATHERMAN CALLS FOR
A BEAUTIFUL BRIGHT
CHILLY AUTUMN MORNING

OPEN THE ATTACHED PROGRAM
SEE WHATS GOING ON
THERE'S A BLACKSMITH
A PIPER, SURVEYOR'S AND MORE 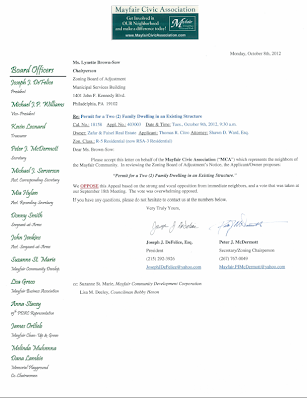 Posted by Joe DeFelice at 6:01 AM No comments: 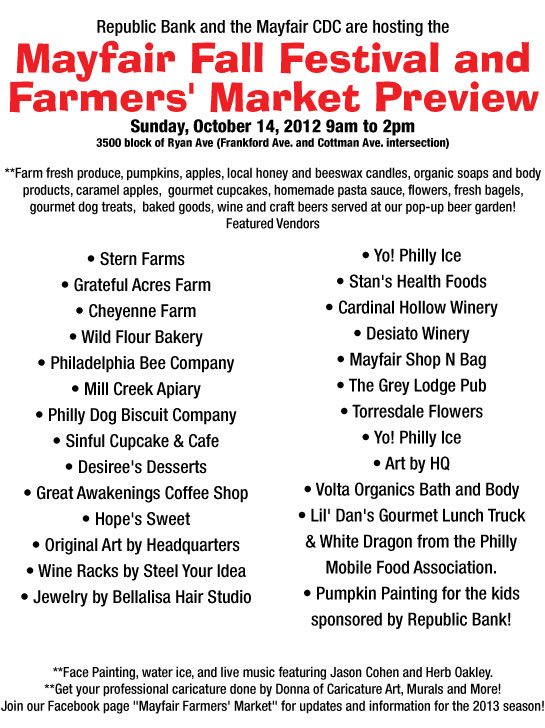 THERE WILL BE A MAJOR CLEAN-UP OF OUR PARK

IN PREPARATION OF NEXT WEEKS CELEBRATION

AND PLACEMENT OF A HISTORICAL MARKER.

SHOW THAT YOU CARE

We were recently made aware of a shooting that happened last evening in our community; we can't stress enough how unfortunate this incident is but also that it does not define us. This appears to be a random act of violence, in the middle of the night, by strangers to our neighborhood. Nevertheless, we want to thank those ever vigilant neighbors in our community that immediately notified law enforcement. It is this type of civic activism that makes our community thrive. We hope that this one random, senseless act will not diminish all the great work we have accomplished over the last several years, including, but not limited to our brand new Farmers Market, our sparkling playground, our annual parade, egg hunt and tree lighting, etc. You have our word that we do our best to make the neighborhood a great place to live and work.
Mayfair Civic Association
www.mayfaircivicassociation.com
Posted by Mayfair Civic Association at 10:42 AM No comments:

Hey everyone! Just a reminder that we are still looking for sponsors for the Mayfair Memorial Playground Halloween Spooktacular on 10/27/12 from 12-2. Sponsor tables are $50 and you can pass out any information about your business or organization to our parents as long as you provide candy or some kind of Halloween themed treat for the children who attend and "Trick or Treat" at your table.

Sponsors so far are:

Please let me know if you are interested in sponsoring a table! We have a deadline of Friday, 10/5/12 for sponsor sign-ups.  If you can't attend and would still like to make a donation to the playground or even to the bake sale table, prize table, or a raffle prize, you can always let me know too!

Mia Hylan
Vice-Chairwoman
Friends of Mayfair Memorial Playground
--
You received this message because you are subscribed to the Google Groups "Mayfair Business Association" group.
To post to this group, send email to mayfairbiz@googlegroups.com.
To unsubscribe from this group, send email to mayfairbiz+unsubscribe@googlegroups.com.
For more options, visit this group at http://groups.google.com/group/mayfairbiz?hl=en. 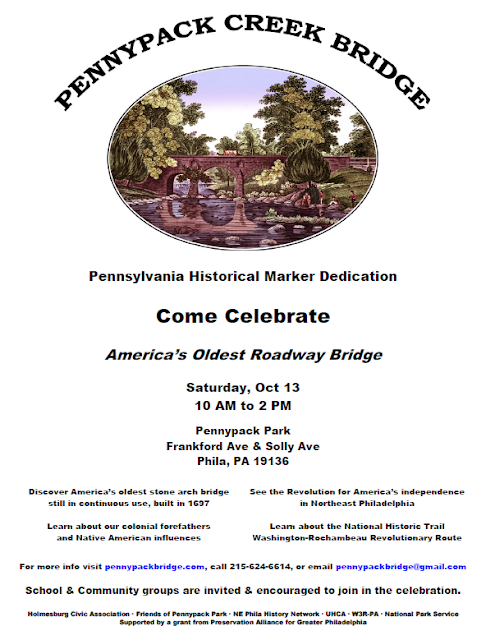