New Farmers Market Will Crop Up in Mayfair

New Farmers Market Will Crop Up in Mayfair

Philadelphia, PA, July 17, 2012 – The Mayfair Community Development Corporation is thrilled to announce that they are partnering with Republic Bank in the formation of the Mayfair Farmers Market. Additional partners in this endeavor are the Mayfair Civic Association and the Mayfair Business Association to ensure the participation of local MBA members. The Mayfair Farmers Market will kick into full gear in 2013 from May to October with a farmers market to be held every Sunday. In anticipation of  the full-time 2013 kick-off, two introductory days will be held on Sunday, September  23, 2012 and Sunday, October 14, 2012 so neighbors can get a taste of what to expect starting in the spring-summer season 2013. The Mayfair Farmer's Market will spring up from May to October on Sunday afternoons  from 9 am to 2 pm at the intersection of Frankford Ave and Ryan Ave. A portion of Ryan Ave will be closed off during market hours.

MCA president, Joe DeFelice is grateful to Philadelphia councilman, Bobby Henon and his staff for helping with city legislation to make the Mayfair Farmers Market a reality. “Chris Creelman, Lisa Deeley, Courtney Voss, and of course, Bobby, were vital in helping us with the development of the farmers market.” Added DeFelice, “We are also ecstatic that Republic Bank, a Mayfair Business Association member and one of our biggest neighborhood supporters, will be helping us out as well.”

About 8-10 vendor stalls providing locally grown, farm-fresh organic produce, local honey, specialty meats and cheeses, baked goods and artisan breads and other specialty foods will be present at the Mayfair Farmers Market as well as several members of the Philly Mobile Food Association. Pre-approved neighboring businesses, who are current members of the MBA, are also encouraged to set up a table to sell their goods as well.

President of the Mayfair Business Association and owner of The Grey Lodge Pub, Mike “Scoats” Scotese states, “Ultimately, we want the Mayfair Farmers Market to incorporate as many of our local Mayfair Business Association members to work in conjunction with outside vendors. We see this as not only highlighting many of the great businesses currently in Mayfair, but perhaps attracting some of these unique businesses to the Frankford Avenue Business Corridor.” DeFelice agrees, “ We want to have a diverse selection of specialty items such as local honey, organic produce, gourmet items, and a rotating selection of gourmet food trucks; things that may not be widely available on the Ave already.” Adds Suzann St. Marie, Executive Director of the Mayfair CDC, “We also want to provide some free entertainment during market days, whether it be an acoustic band, a string quartet, a face-painter or balloon artist for the kids. The participation of neighboring businesses, the central location, and the live music will create a small but festive, street-fair atmosphere that can only be beneficial to the neighborhood.”

The Mayfair Farmers Market is truly a neighborhood collaboration. Mayfair resident and graphic designer, Michael Ennis volunteered his time and talent to design the logo for the Mayfair Farmer's Market. States Ennis, “I wanted to incorporate many of the Mayfair landmarks, such as the Devon, St. Matthew's and St. Timothy's churches, and of course the cornerstone of any neighborhood, the row homes, into my design.” 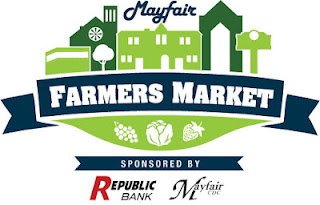 Additionally, When Randy Wolfe, store manager of the Mayfair Branch of Republic Bank and MBA member, heard of the possibility of a Farmers Market essentially opening on their doorstep he encouraged Republic Bank to  step in as a corporate sponsor. St. Marie stated, “In the past year Randy and his staff at Republic Bank have been major contributors to several Mayfair events including the Mayfair-Holmesburg Thanksgiving Parade, the Mayfair Memorial Playground Easter Egg Hunt, The Mayfair Fallen Heroes Run and the Mayfair May Fair. They truly care about this community.” Adds Katie Michaleski, VP/Marketing Manager for Republic Bank,  “Republic Bank is committed to supporting the communities we serve. We are excited about the Farmers Market coming to Mayfair and know it will be great addition for our community”.

Mayfair Civic Association Communications Secretary, Mia Hylan and St. Marie have been working closely on the recruitment of unique outside vendors and with the Philly Mobile Food Association (PMFA) for the Farmers Market. “Andrew at the Philly Mobile Food Association has been great in helping us with offering advice and coordinating their members. The PMFA have very unique members and a wide selection of food available. We're looking to have about 2 trucks present during the September and October launch and then have a rotating selection of trucks starting next year on a weekly basis in addition to all the other wonderful vendors. This is a great opportunity for neighbors to sample different types of food that may not be available on the Frankford business corridor and hopefully choose some favorites.” says Hylan.

Hylan and St. Marie are also working to get a jump on organizing for next year's weekly farmers market. “We are in the midst of creating a vendor application for the Mayfair Farmers Market for the 2013 season and will not initially be charging vendors to participate. However they will have to be pre-approved and have all current business licenses to operate in Philadelphia. We are also working on  obtaining a website, creating a Facebook page and Twitter account. Our plan is to promote the Mayfair Farmers Market via our current 4-5 Mayfair facebook pages, MCA, MBA, Mayfair Town Watch, and the Mayfair Memorial Playground Page which have a total following of about 1,000 plus local residents. We hope to generate a lot of excitement and interest with the preview days.”

DeFelice adds, “We are thrilled to partner with local community leaders and business owners to open this new market in the heart of Mayfair. It’s the first time we’ve ever operated a farmers market and we think it will be an asset to the neighborhood.  We invite all residents of Philadelphia to join us at the September and October previews and subsequently next year, when we officially launch the weekly markets in Mayfair.”
Posted by Joe DeFelice at 11:59 AM

Hi Sarah,
Hope you are having a truly wonderful summer.

So excited about having a farmers' market in the neighborhood. I have been to the farmers' market on Second Street and the one in West Philly. Unfortunately the one at the Frankford Transportation Center was only open during working hours. Really looking forward to fresh organic goods!

Thank you, Mayfair Civic Association for all your hard work.

of course like your website but you need to check the spelling on several of
your posts. Several of them are rife with spelling issues and I find it very troublesome to tell the truth
on the other hand I will surely come back again.

Attractive section of content. I just stumbled upon
your web site and in accession capital to assert that I acquire in fact
enjoyed account your blog posts. Anyway I'll be subscribing to your augment and even I achievement you access consistently quickly.

Undeniably consider that that you said. Your favorite reason appeared to be
on the web the easiest thing to understand of. I say to you, I definitely get irked at the same time as folks think about concerns that
they plainly do not recognise about. You controlled to hit the nail upon the top
and also defined out the entire thing without having side effect , other people could
take a signal. Will probably be back to get more.
Thanks

If you desire to grow your knowledge simply keep visiting this
website and be updated with the most up-to-date gossip posted here.

Howdy just wanted to give you a quick heads up.
The text in your content seem to be running off the screen in Ie.
I'm not sure if this is a format issue or something to do with browser compatibility but I figured I'd post to
let you know. The layout look great though! Hope you get
the problem solved soon. Thanks

Hola! I've been reading your blog for a long time now and finally got the courage to go ahead and give you a shout out from Humble Tx!
Just wanted to say keep up the excellent work!

Think of this as a virtual community where you can make friends with someone halfway around the world.
It delivers the next generation of interactive entertainment.
PS3 blue ray fix is an easy job and you can do
it all yourself.

Our air complete of dust and it gets within the computer and blocks
the air to cool the CPU, and other components.
Send Wap Drive Interface with your own programming resources using VB,VS,Delphi, PHP,ASP.

The issue maybe hardware or software related. It enables you to receive and send txt messages free of
charge. That is some thing I wish I had regarded
before I started promoting myself on Fb.

Here is my weblog: whatsapp for pc

It is not my first time to pay a quick visit this website,
i am browsing this web site dailly and get pleasant
information from here daily.

Hey there I am so glad I found your website, I really found you by
error, while I was browsing on Bing for something else, Nonetheless I am here now and would just
like to say kudos for a fantastic post and a all round thrilling blog (I also love the theme/design), I don't have time to read through it all at the moment but I
have saved it and also added your RSS feeds, so when I have time I
will be back to read more, Please do keep up the awesome work.

Farmer's markets are a God send

It is known to everyone that GRE is the most important test to be undertaken if one want to leave abroad countries for studies. So without any doubt it has been started pursuing by almost every students regarding abroad studies. Thanks for sharing this.

I totally support GRE/GMAT based exams when a student is going to enter into programs of such a higher academic level.

So now do we have to write GRE or only GRE subject test (Math) or both if we want to join a grad college or they are all just moot now ?
Study abroad consultants in Chennai