Fwd: Abandoned Bike in Your Neighborhood?

Hello to everyone at the Mayfair Civic Association,

We at the Bicycle Coalition would like to inform you about the city-wide program to remove abandoned, unclaimed bicycles on July 23rd.  This program is an attempt by the Mayor's Office of Transportation and Utilities to clean up Philadelphia's streets and sidewalks. If you have seen a bike in your area that has missing, unusable parts and that has been locked in the same place for months please call 311 to report an abandoned bike.  For more information you can visit our blog-site: http://blog.bicyclecoalition.org/2012/06/city-wants-to-know-about-that-abandoned.html

The below was tweaked from testimony given before the House Democrat Committee on Urban Affairs:

Testimony of Joseph J. DeFelice,
Chairman of the Mayfair Community Development Corporation (CDC) and
President of the Mayfair Civic Association
Before the City Council Committee on Public Safety and
The Philadelphia City Council Committee on Licenses and Inspection
Wednesday June 20, 2012
10 AM
Philadelphia City Hall
Dear Members,

NEastphilly.com Article Recognizing the Excellent Work of our Community Groups

This is a follow-up story to our coverage in “District 172: The Politics of Change after State Rep. John Perzel,” a collaborative effort with Philadelphia Neighborhoods funded by J-Lab.

If any assumption was ever made about the Northeast, by any Philadelphian, it would be its position as a younger brother to Center City Philadelphia, not unlike Philadelphia in comparison with New York. However, Mayfair Civic Association President Joe DeFelice said that was an image his neighborhood aimed to defy.

One year ago, after and extreme fundraising effort, DeFelice met with NEast Philly to discuss the renovation and reopening of the Mayfair Memorial Playground. At the time, Mayfair was struggling with the recent political changes caused by the indictment of Pennsylvania House 172nd District’s Rep. John Perzel. The indictment, coupled with a downturned economy, forced the district into a difficult era.

State grants, which were freely given in previous years, dried up. Pennsylvania voted in a Republican governor and a Republican majority who created serious budgetary constraints. In the 172nd District freshman Rep. Kevin Boyle was elected in 2010.

“I think Kevin is trying, but he is a freshman Democrat in a significant minority,” DeFelice said. “Kevin just can’t wield the clout that John [Perzel] once did, so the community has had to get more creative in the way that we do things.”

That was where DeFelice and company defied odds. Mayfair saw community activism unparalleled in many other Northeast neighborhoods. A combined effort from Mayfair community organizations brought about positive changes and strengthened the local voice.

“Rather than relying on the elected officials, the neighbors have decided to rely on themselves,” DeFelice said. “At the time when the article was written last year, we did not have a playground. It took lobbying international corporations, the school district to allow us to build…these are things we would have relied on elected officials for.” 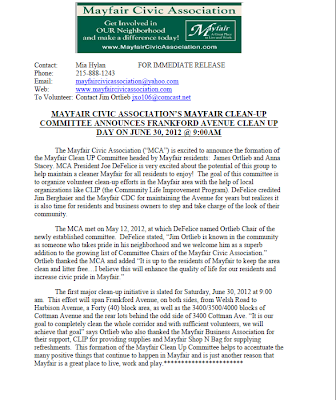 The Mayfair Civic Association (“MCA”) is excited to announce the formation of the Mayfair Clean UP Committee headed by Mayfair residents:  James Ortlieb and Anna Stacey. MCA President Joe DeFelice is very excited about the potential of this group to help maintain a cleaner Mayfair for all residents to enjoy!  The goal of this committee is to organize volunteer clean-up efforts in the Mayfair area with the help of local organizations like CLIP (the Community Life Improvement Program). DeFelice credited Jim Berghaier and the Mayfair CDC for maintaining the Avenue for years but realizes it is also time for residents and business owners to step and take charge of the look of their community.
The MCA met on May 12, 2012, at which DeFelice named Ortlieb Chair of the newly established committee.  DeFelice stated, “Jim Ortlieb is known in the community as someone who takes pride in his neighborhood and we welcome him as a superb addition to the growing list of Committee Chairs of the Mayfair Civic Association.”  Ortlieb thanked the MCA and added “It is up to the residents of Mayfair to keep the area clean and litter free…I believe this will enhance the quality of life for our residents and increase civic pride in Mayfair.”
The first major clean-up initiative is slated for Saturday, June 30, 2012 at 9:00 am.  This effort will span Frankford Avenue, on both sides, from Welsh Road to Harbison Avenue, a Forty (40) block area, as well as the 3400/3500/4000 blocks of Cottman Avenue and the rear lots behind the odd side of 3400 Cottman Ave. “It is our goal to completely clean the whole corridor and with sufficient volunteers, we will achieve that goal” says Ortlieb who also thanked the Mayfair Business Association for their support, CLIP for providing supplies and Mayfair Shop N Bag for supplying refreshments.  This formation of the Mayfair Clean Up Committee helps to accentuate the many positive things that continue to happen in Mayfair and is just another reason that Mayfair is a great place to live, work and play.***********************
Posted by Joe DeFelice at 12:25 PM 2 comments: 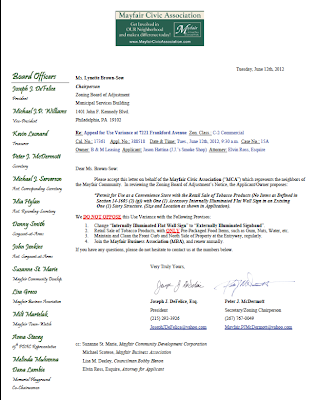 Please accept this letter on behalf of the Mayfair Civic Association (“MCA”) which represents the neighbors of the Mayfair Community. In reviewing the Zoning Board of Adjustment’s Notice, the Applicant/Owner proposes:

“Permit for Use as a Convenience Store with the Retail Sale of Tobacco Products (No Items as Defined in
Section 14-1605 (2) (g)) with One (1) Accessory Internally Illuminated Flat Wall Sign in an Existing
One (1) Story Structure. (Size and Location as shown in Application).

We DO NOT OPPOSE this Use Variance with the Following Provisos:
1. Change “Internally Illuminated Flat Wall Sign” to “Externally Illuminated Signband”.
2. Retail Sale of Tobacco Products, with ONLY Pre-Packaged Food Items, such as Gum, Nuts, Water, etc.
3. Maintain and Clean the Front Curb and North Side of Property at the Entryway, regularly.
4. Join the Mayfair Business Association (MBA), and renew annually.

If you have any questions, please do not hesitate to contact us at the numbers below. 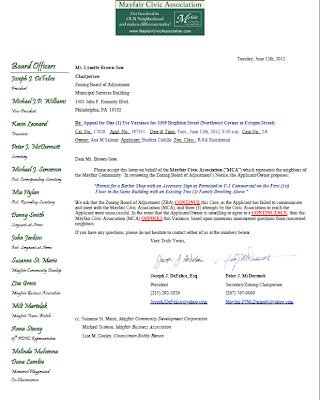 If you have any questions, please do not hesitate to contact either of us at the numbers below.

Update on the Sale of the Parcels Behind 3400 Ryan/Cottman Aves. Letter from our Attorney 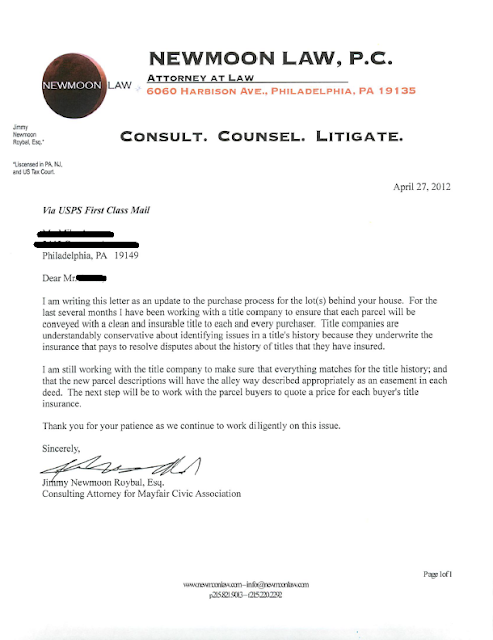 Scale of the Parcels 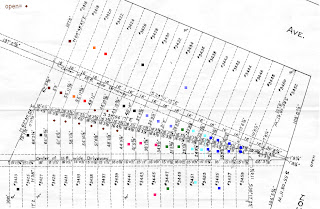 The Mayfair Civic Association (“MCA”) is excited to announce the formation of the Mayfair Dog Park Committee headed by residents of Mayfair and dog owners, Megan Whalen and Michael Ennis. MCA President Joe DeFelice is very excited about the potential of this group to succeed in installing a fenced-in, off leash dog park for the residents and neighbors in Mayfair and the surrounding communities. Whalen cites the many dog parks formed in other parts of the city and the complete lack of officially sanctioned dog parks in the Northeast as a huge hole in the fabric of the Northeast Philadelphia community.  "A neighborhood dog park in Mayfair is essential to the community. Many people consider their pets, especially dogs, as members of their family. The goal of this committee is to create a safe and well-maintained space for the dogs, where dog owners can meet and socialize with other like-minded and animal loving neighbors. It can only add to the appeal of the Mayfair, making it a more desirable place to live for residents of all ages." Added Ennis, "At the two informal meetings we held, we've have a wide range of age groups interested in this project; from young professionals, to families, retirees and city employees. We feel it is in the best interest of the area as a whole to see this project succeed. We see this dog park as an opportunity to bring all of our community together in a common space that will be used by not only our 2-legged friends, but our four-legged ones as well."
Ms. Whalen, Mr. Ennis, and MCA Communications Secretary Mia Hylan recently met with Barry Bessler, chief of staff at the Office of the First Deputy Commissioner of the Philadelphia Parks and Recreation Department to discuss possible locations within Pennypack Park. Philadelphia Parks and Recreation recently merged with the Fairmount Park Commission who manages much of the open green space within the Mayfair community. Although the group is cautiously optimistic about finding a location that will be mutually beneficial to both the Mayfair community and parks system, there are still many obstacles that need to be addressed; the largest of which is fundraising enough money to install a 6 foot fence around the 2/3 of an acre to a full acre of ground, which is the recommended amount of space for a dog park.
Mr. Bessler also stressed to the group the importance of community support and interest. "Based on the interest we saw at the Mayfair Dog Park table at the Mayfair May

Fair, where we held a doggie treats bake sale and a Dog Pageant, we were very encouraged by the community. This project may take awhile to get off the ground and we're asking neighbors with dogs, general animal lovers, or just neighborhood proponents to get involved by joining our Facebook page at Mayfair Dog Park or by emailing us at dogpark215@gmail.com. For now, this will be the primary form of organizing meetings and communicating progress." said Hylan. "The amount of interest in this project is going to be one of the greatest gauges of whether we will succeed in actually installing a dog park somewhere in the neighborhood."
Within the next couple of weeks, Whalen and Ennis plan on scheduling another more public meeting to discuss fundraising ideas, the eventual establishment of a 501c3, establishing a bank account, and narrowing down some of the options presented by Mr. Bessler for potential locations. They also plan on doing some door-to-door visits and grassroots outreach to neighbors and dog owners to generate more interest in the cause.
This formation of the Mayfair Dog Park Committee helps to accentuate the many positive things that continue to happen in Mayfair and is just another reason that Mayfair is a great place to live, work and play.************************
Posted by Joe DeFelice at 3:16 PM 3 comments:

The MAYFAIR CIVIC ASSOCIATION’S- MAYFAIR Clean-UP Committee Proudly Presents:
FRANKFORD AVE
Clean UP!
SATURDAY
JUNE 30, 2012
9:00 AM
Please report to Frankford and Cottman  Avenues @ 8:30am – 9am for instructions.
Contact Committee Chair Jim Ortlieb at jxo106@comcast.net with any questions.
Cleaning Supplies provided by CLIP
Refreshments supplied by Mayfair Shop-N-Bag
C'Mon out and pitch in to help clean up the Neighborhood!
Posted by Joe DeFelice at 4:55 PM 2 comments:

NEastPhilly.com - With City Council Amendment, Mayfair One Step Closer to Getting a Farmers Market 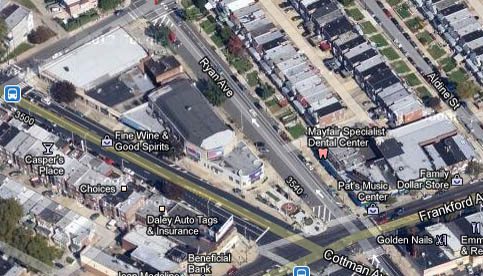 The Oxford Circle Farmers Market is open. Frankford’s market will open later this month. Is Mayfair next?
The Mayfair Civic Association is celebrating a City Council amendment to part of the code about Philadelphia’s sidewalk sales.
Earlier this month, MCA board members Joe DeFelice and Mia Hylan met with Councilman Bobby Henon, D-6th, to get the ball rolling. With the amendment, the wheels are in motion. Read More Here