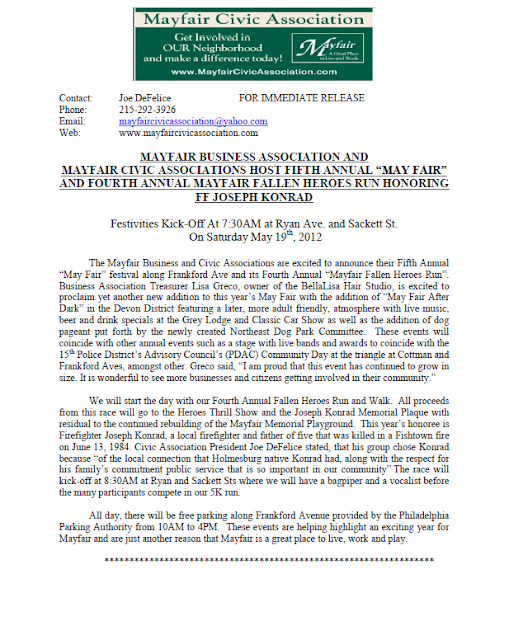 The Mayfair Business and Civic Associations are excited to announce their Fifth Annual “May Fair” festival along Frankford Ave and its Fourth Annual “Mayfair Fallen Heroes Run”.  Business Association Treasurer Lisa Greco, owner of the BellaLisa Hair Studio, is excited to proclaim yet another new addition to this year’s May Fair with the addition of “May Fair After Dark” in the Devon District featuring a later, more adult friendly, atmosphere with live music, beer and drink specials at the Grey Lodge and Classic Car Show as well as the addition of dog pageant put forth by the newly created Northeast Dog Park Committee.  These events will coincide with other annual events such as a stage with live bands and awards to coincide with the 15th Police District’s Advisory Council’s (PDAC) Community Day at the triangle at Cottman and Frankford Aves, amongst other. Greco said, “I am proud that this event has continued to grow in size. It is wonderful to see more businesses and citizens getting involved in their community.”

We will start the day with our Fourth Annual Fallen Heroes Run and Walk.  All proceeds from this race will go to the Heroes Thrill Show and the Joseph Konrad Memorial Plaque with residual to the continued rebuilding of the Mayfair Memorial Playground.  This year’s honoree is Firefighter Joseph Konrad, a local firefighter and father of five that was killed in a Fishtown fire on June 13, 1984. Civic Association President Joe DeFelice stated, that his group chose Konrad because “of the local connection that Holmesburg native Konrad had, along with the respect for his family’s commitment public service that is so important in our community” The race will kick-off at 8:30AM at Ryan and Sackett Sts where we will have a bagpiper and a vocalist before the many participants compete in our 5K run.

All day, there will be free parking along Frankford Avenue provided by the Philadelphia Parking Authority from 10AM to 4PM.  These events are helping highlight an exciting year for Mayfair and are just another reason that Mayfair is a great place to live, work and play.