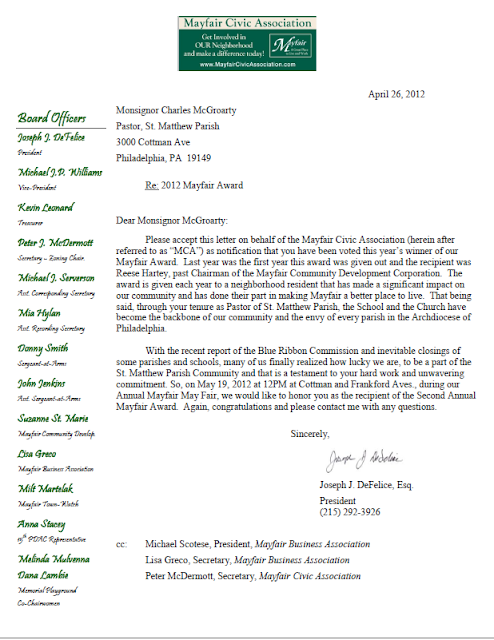 Dear Monsignor McGroarty:
Please accept this letter on behalf of the Mayfair Civic Association (herein after referred to as “MCA”) as notification that you have been voted this year’s winner of our Mayfair Award.  Last year was the first year this award was given out and the recipient was Reese Hartey, past Chairman of the Mayfair Community Development Corporation.  The award is given each year to a neighborhood resident that has made a significant impact on our community and has done their part in making Mayfair a better place to live.  That being said, through your tenure as Pastor of St. Matthew Parish, the School and the Church have become the backbone of our community and the envy of every parish in the Archdiocese of Philadelphia.

With the recent report of the Blue Ribbon Commission and inevitable closings of some parishes and schools, many of us finally realized how lucky we are, to be a part of the St. Matthew Parish Community and that is a testament to your hard work and unwavering commitment. So, on May 19, 2012 at 12PM at Cottman and Frankford Aves., during our Annual Mayfair May Fair, we would like to honor you as the recipient of the Second Annual Mayfair Award.  Again, congratulations and please contact me with any questions.
Sincerely,

Police plan to hold a community meeting Thursday night in Holmesburg. It will take place at the Police Athletic League Center on the 4400 block of Aldine at 7:30 p.m http://www.nbcphiladelphia.com/news/local/Vandalism-Victims-Urged-Not-to-Retaliate--148988515.html
Posted by Joe DeFelice at 1:59 PM 5 comments:

The inductees were chosen by the Hall of Fame Selection Committee, an eight-member panel of experts in various aspects of Northeast Philadelphia life. The committee is chaired by Sister Francesca Onley. The public participated in the selection process by suggesting candidates for the committee’s consideration.

The inductees will be honored at a ceremony to be held Sunday, October 21, 2012 at 1:00 PM in the Education & Technology Center building at Holy Family University, 9801 Grant Avenue, Philadelphia, PA, 19114.

Brief Profiles of 2012 Inductees
Historical Figures
Frank Shuman (1862-1918), Inventor and Solar Power Pioneer
Frank Shuman was born in 1862 in Brooklyn, NY.  He had little formal education but his interest in science led him to experiment and many of his experiments would become important inventions.  His first invention, a process for making wire glass, won Shuman the prestigious John Scott Medal from the Franklin Institute, an honor shared with the likes of Thomas Edison, the Wright Brothers, Madame Curie, and Jonas Salk.  Frank Shuman moved to Philadelphia in the 1890s to work for the Tacony Iron Works on fabrication of the William Penn statue that now sits atop of Philadelphia City Hall.  While living in Tacony he operated businesses and began conducting experiments on an invention he called a “sun machine,” which used solar heat to run an internal combustion engine.  He received a patent on this invention in 1910.  In 1912 he began construction in Egypt on the world’s first solar thermal power station, designed to pump water from the Nile River to irrigate the area’s cotton fields.  The outbreak of World War I in 1914 brought a halt to the project and it was never revived. Shuman returned to Philadelphia, where he later invented safety glass, which is still used in cars and trains today. He died in 1918 at the age of 56, without realizing his dream of harnessing the power of the sun as a safe, renewal power source.
Leon Sullivan (1922-2001), Civil Rights Leader/Anti-apartheid Activist
Leon Sullivan was born in Charleston, WV, in 1922 and became a Baptist minister at the age of 18. In 1943 he moved to New York City, where he attended Union Theological Seminary and then Columbia University, from which he received a master’s degree in religion in 1947. In 1950 he became Pastor of Zion Baptist Church in Philadelphia, where he served until 1988 and became known as the “Lion of Zion.” In the 1950s Reverend Sullivan and his wife, Grace, were among the original residents of Greenbelt Knoll, a residential development in Holmesburg that was the first planned interracial development in Philadelphia and one of the first in the nation. Reverend Sullivan was a well-known civil rights leader and activist who initiated many innovative social and economic development programs.  In 1964 he founded the Opportunities Industrialization Centers, which became a successful national and then international job training and life skills program. In 1971, he joined the Board of Directors of General Motors, becoming the first African American on the board of a major corporation. Leon Sullivan was also an internationally-respected anti-apartheid activist.  His “Sullivan Principles” were widely adopted and helped to hasten the end of apartheid in South Africa.  Reverend Sullivan received numerous awards and honorary doctorates in his lifetime. In 1992 he received the Presidential Medal of Freedom, the nation’s highest civilian honor, from President George H. W. Bush. He died on April 24, 2001 at the age of 78.
Living Individuals
Ed Kelly, Business and Community Leader
Ed Kelly is a longtime community activist and business leader in Northeast Philadelphia.  A World War II combat veteran who served in the Pacific theater, Ed was the owner of a successful auto repair business in Burholme.  This led him to become a member and eventually president of the Greater Northeast Philadelphia Chamber of Commerce. He served in the latter capacity from 1971 through 1982.  In the 1970s Ed Kelly and others founded the Pennypack Park Music Festival.  Free concerts were held once a week in the Park and Kelly paid to have a band shell built to showcase the performers at these concerts.  The concerts stopped in 1991 but with Kelly’s help began again in 2001. The band shell and stage were restored and in July 2011 the stage was named the Ed Kelly Stage.  Kelly and his wife Jane live in the Rhawnhurst section of NE Philadelphia and have been married for over 60 years.
Chris Ferguson, Astronaut
Retired astronaut and US Navy Captain Chris Ferguson graduated from Archbishop Ryan High School in 1979.  He received his undergraduate degree from Drexel University in 1984 and his master’s in aeronautical engineering from the Naval Postgraduate School in Monterey, CA.  He served as a naval pilot until entering the US Space program in 1998. His first space flight was in 2006. He served as commander of the November 2008 Endeavour Space Shuttle flight and the July 2011 Atlantis flight.  The latter was the final flight of Atlantis and represented the end of NASA’s Space Shuttle program.  Chris Ferguson was a highly decorated officer prior to retiring from the Navy in June 2010 and then from NASA in December 2011.  He is now employed by the Boeing Company as Director of Commercial Crew Interface in the company’s Space Exploration Division.  He lives in Houston with his wife Sandra and their three children.
Institutional Inductees: Northeast Philadelphia houses of worship at least 200 years old:
·          All Saints Episcopal Church, Torresdale, founded in 1772
·         Campbell AME Church, Frankford, founded in 1807, the nation’s second oldest African Methodist Episcopal Church
·         Pennepack Baptist Church, Bustleton, founded in 1688, Pennsylvania’s oldest Baptist Church
·         Presbyterian Church of Frankford, founded 1770, the original church building housed prisoners captured in Battle of Trenton during Revolutionary War
·         Trinity Church Oxford, Lawndale, since at least 1698, one of the oldest Episcopal churches in Pennsylvania
·         Unity Monthly Meeting Frankford, founded in 1682, and Byberry Monthly Meeting, founded in 1683, among earliest Quaker meetings in Pennsylvania

Release Re Tire Slasher and Correction

Today the Philadelphia Police Department arrested David Toledo of the 4000 block of Aldine street in relation to the tire slashings on that block an the surrounding area. This person has been portrayed as a member of the Mayfair Townwatch. This is absolutely false. He never attended training, is not certified nor does he reside within the boundaries of the organization. He has, at times however, referred to himself as a block watch member. While we are thankful to Capt Frank Bachmayer an the 15th District for their arrest, we ask that the news media clear the record and make the necessary corrections to their story so that the Mayfair Townwatch can continue to make Mayfair a safe and great place to live and work.
Posted by Mayfair Civic Association at 4:43 PM 4 comments:

Please come out on Saturday May 19th, immediately following our Mayfair Fallen Heroes Run, to enjoy our 5th Annual Mayfair May Fair.  This year we will also be adding an "After Dark" component which will be held in the Devon District with more relaxed atmosphere.  Click the link below for more details:

http://www.mayfaircivicassociation.com/p/mayfair-may-fair.html
Posted by Joe DeFelice at 7:47 AM No comments:

Please visit our page by clicking HERE
You will find information on how to Register, how to Sponsor, a Run route, a letter from our race director, a link to register online and our new poster.
Sponsorships go a long way - $100 gets you general sponsorship while $300 gets your ad displayed along the route plus along Cottman and Frankford for the entire Mayfair May Fair.
Again, click here
Posted by Joe DeFelice at 7:01 AM 1 comment:

Spring is upon us, and that means we are all itching to get outside and enjoy our neighborhood. If you made it out to West Philly last summer you may have had a chance to enjoy the city in a whole new way, sitting on a Parklet. Parklets are small platforms that take the place of parking, with seats and tables that allow people to stop, sit and enjoy their neighborhood street life. They can act like a front porch or stoop to hang out on. The University City District partnered with the Mayor’s Office of Transportation and Utilities to pilot Parklets at 43rd and Baltimore and 36th and Lancaster. It was a serious attraction for the entire neighborhood, and was full every weekend. The parklet, sited in front of the Green Line Coffee Shop, also boosted their revenue by nearly 20%.

For More Information Click Here
Posted by Joe DeFelice at 6:58 AM No comments: 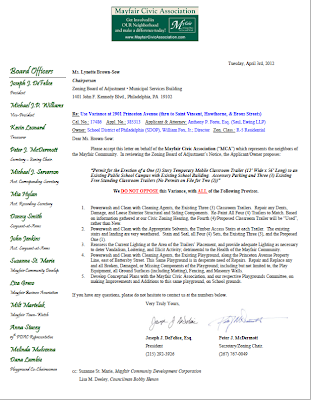 Re: Use Variance at 2901 Princeton Avenue (thru to Saint Vincent, Hawthorne, & Brous Streets)

Please accept this letter on behalf of the Mayfair Civic Association (“MCA”) which represents the neighbors of the Mayfair Community. In reviewing the Zoning Board of Adjustment’s Notice, the Applicant/Owner proposes:

“Permit for the Erection of a One (1) Story Temporary Mobile Classroom Trailer (12’ Wide x 56’ Long) to an Existing Public School Campus with Existing School Building. Accessory Parking and Three (3) Existing Free Standing Classroom Trailers (No Permits on File for Two (2))”

We DO NOT OPPOSE this Variance, with ALL of the Following Provisos.

1. Powerwash and Clean with Cleaning Agents, the Existing Three (3) Classroom Trailers. Repair any Dents, Damage, and Loose Exterior Structural and Siding Components. Re-Paint All Four (4) Trailers to Match. Based on information gathered at our Civic Zoning Hearing, the Fourth (4)/Proposed Classroom Trailer will be “Used”, rather than New.

2. Powerwash and Clean with the Appropriate Solvents, the Timber Access Stairs at each Trailer. The existing stairs and landing are very weathered. Stain and Seal, all Four (4) Sets, the Existing Three (3), and the Proposed One (1).

3. Reassess the Current Lighting at the Area of the Trailers’ Placement, and provide adequate Lighting as necessary to deter Vandalism, Loitering, and Illicit Activity; detrimental to the Health of the Mayfair Community.

4. Powerwash and Clean with Cleaning Agents, the Existing Playground, along the Princeton Avenue Property Line, east of Battersby Street. This Same Playground is in desperate need of Repairs. Repair and Replace any and all Broken, Damaged, or Missing Components of the Playground; including but not limited to, the Play Equipment, all Ground Surfaces (including Matting), Fencing, and Masonry Walls.

5. Develop Conceptual Plans with the Mayfair Civic Association, and our respective Playgrounds Committee, on making Improvements and Additions to this same playground, on School grounds.

If you have any questions, please do not hesitate to contact us at the numbers below.

http://wharton.qualtrics.com/SE/?SID=SV_cLKjv3roCOCJfqQ
Posted by Mayfair Civic Association at 8:28 AM 10 comments: