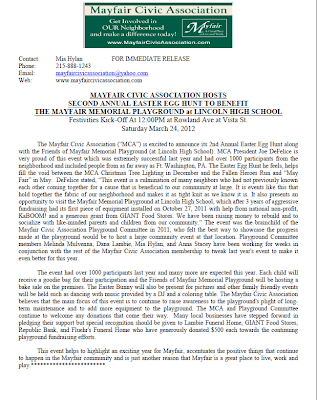 The Mayfair Civic Association (“MCA”) is excited to announce its 2nd Annual Easter Egg Hunt along with the Friends of Mayfair Memorial Playground (at Lincoln High School). MCA President Joe DeFelice is very proud of this event which was extremely successful last year and had over 1000 participants from the neighborhood and included people from as far away as Ft. Washington, PA. The Easter Egg Hunt he feels, helps fill the void between the MCA Christmas Tree Lighting in December and the Fallen Heroes Run and “May Fair” in May. DeFelice stated, “This event is a culmination of many neighbors who had not previously known each other coming together for a cause that is beneficial to our community at large. It is events like this that hold together the fabric of our neighborhood and makes it as tight knit as we know it is. It also presents an opportunity to visit the Mayfair Memorial Playground at Lincoln High School, which after 3 years of aggressive fundraising had its first piece of equipment installed on October 27, 2011 with help from national non-profit, KaBOOM! and a generous grant from GIANT Food Stores. We have been raising money to rebuild and to socialize with like-minded parents and children from our community.” The event was the brainchild of the Mayfair Civic Association Playground Committee in 2011, who felt the best way to showcase the progress made at the playground would be to host a large community event at that location. Playground Committee members Melinda Mulvenna, Dana Lambie, Mia Hylan, and Anna Stacey have been working for weeks in conjunction with the rest of the Mayfair Civic Association membership to tweak last year's event to make it even better for this year.

The event had over 1000 participants last year and many more are expected this year. Each child will receive a goodie bag for their participation and the Friends of Mayfair Memorial Playground will be hosting a bake sale on the premises. The Easter Bunny will also be present for pictures and other family friendly events will be held such as dancing with music provided by a DJ and a coloring table. The Mayfair Civic Association believes that the main focus of this event is to continue to raise awareness to the playground's plight of long-term maintenance and to add more equipment to the playground. The MCA and Playground Committee continue to welcome any donations that come their way. Many local businesses have stepped forward in pledging their support but special recognition should be given to Lambie Funeral Home, GIANT Food Stores, Republic Bank, and Fluehr's Funeral Home who have generously donated $500 each towards the continuing playground fundraising efforts.

This event helps to highlight an exciting year for Mayfair, accentuates the positive things that continue to happen in the Mayfair community and is just another reason that Mayfair is a great place to live, work and play.************************

Joe, you are doing great things for your community. I love when the younger people make their voices heard by their actions. you are going places. I am very proud of my best friend's son. See you there.