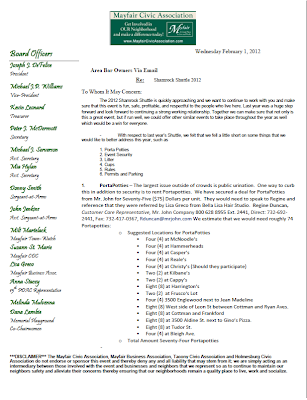 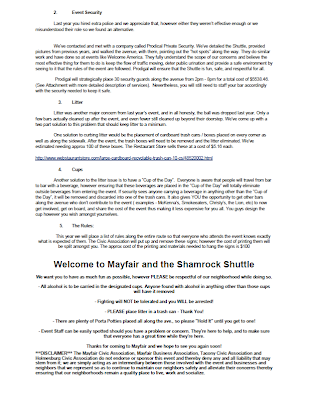 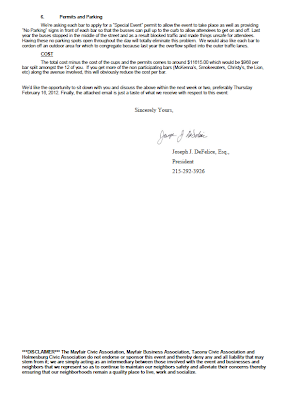 The 2012 Shamrock Shuttle is quickly approaching and we want to continue to work with you and make sure that this event is fun, safe, profitable, and respectful to the people who live here. Last year was a huge step forward and look forward to continuing a strong working relationship. Together we can make sure that not only is this a great event, but if run well, we could offer other similar events to take place throughout the year as well which would be a win for everyone.

- With respect to last year's Shuttle, we felt that we fell a little short on some things that we would like to better address this year, such as
1. Porta Potties
2. Event Security
3. Litter
4. Cups
5. Rules
6. Permits and Parking
1. PortaPotties – The largest issue outside of crowds is public urination. One way to curb this in addition to security is to rent Portapotties. We have secured a deal for PortaPotties from Mr. John for Seventy-Five ($75) Dollars per unit. They would need to speak to Regine and reference that they were referred by Lisa Greco from Bella Lisa Hair Studio. Regine Duncan, Customer Care Representative, Mr. John Company 800 628 8955 Ext. 2441, Direct: 732-692-2441, Fax: 732-417-0367, Rduncan@mrjohn.com We estimate that we would need roughly 74 Portapotties:

§ Four (4) at Christy’s (Should they participate)

§ Eight (8) West side of Leon St between Cottman and Ryan Aves.

§ Eight (8) at Cottman and Frankford

2. Event Security
Last year you hired extra police and we appreciate that, however either they weren’t effective enough or we misunderstood their role so we found an alternative.

We've contacted and met with a company called Prodical Private Security. We've detailed the Shuttle, provided pictures from previous years, and walked the avenue, with them, pointing out the "hot spots" along the way. They do similar work and have done so at events like Welcome America. They fully understand the scope of our concerns and believe the most effective thing for them to do is keep the flow of traffic moving, deter public urination and provide a safe environment by seeing to it that the rules of the event are followed. Prodigal will ensure that the Shuttle is fun, safe, and respectful for all.

Prodigal will strategically place 30 security guards along the avenue from 2pm - 8pm for a total cost of $5538.46. (See Attachment with more detailed description of services). Nevertheless, you will still need to staff your bar accordingly with the security needed to keep it safe.
3. Litter

Litter was another major concern from last year’s event, and in all honesty, the ball was dropped last year. Only a few bars actually cleaned up after the event, and even fewer still cleaned up beyond their doorstep. We've come up with a two part solution to this problem that should keep litter to a minimum.

One solution to curbing litter would be the placement of cardboard trash cans / boxes placed on every corner as well as along the sidewalk. After the event, the trash boxes will need to be removed and the litter eliminated. We've estimated needing approx 100 of these boxes. The Restaurant Store sells these at a cost of $5.16 each.
http://www.webstaurantstore.com/large-cardboard-recyclable-trash-can-10-cs/48520002.html
4. Cups
Another solution to the litter issue is to have a "Cup of the Day". Everyone is aware that people will travel from bar to bar with a beverage, however ensuring that these beverages are placed in the "Cup of the Day" will totally eliminate outside beverages from entering the event. If security sees anyone carrying a beverage in anything other than the "Cup of the Day", it will be removed and discarded into one of the trash cans. It also gives YOU the opportunity to get other bars along the avenue who don't contribute to the event ( examples - McKenna's, Smokeeaters, Christy's, the Lion, etc) to now get involved, get on board, and share the cost of the event thus making it less expensive for you all. You guys design the cup however you wish amongst yourselves.
5. The Rules:
This year we will place a list of rules along the entire route so that everyone who attends the event knows exactly what is expected of them. The Civic Association will put up and remove these signs; however the cost of printing them will be split amongst you. The approx cost of the printing and materials needed to hang the signs is $100
Welcome to Mayfair and the Shamrock Shuttle
We want you to have as much fun as possible, however PLEASE be respectful of our neighborhood while doing so.
- All alcohol is to be carried in the designated cups. Anyone found with alcohol in anything other than those cups will have it removed
- Fighting will NOT be tolerated and you WILL be arrested!
- PLEASE place litter in a trash can - Thank You!
- There are plenty of Porta Potties placed all along the ave., so please "Hold It" until you get to one!
- Event Staff can be easily spotted should you have a problem or concern. They're here to help, and to make sure that everyone has a great time while they're here.
Thanks for coming to Mayfair and we hope to see you again soon!
6. Permits and Parking

We're asking each bar to apply for a "Special Event" permit to allow the event to take place as well as providing "No Parking" signs in front of each bar so that the busses can pull up to the curb to allow attendees to get on and off. Last year the buses stopped in the middle of the street and as a result blocked traffic and made things unsafe for attendees. Having these no parking spots open throughout the day will totally eliminate this problem. We would also like each bar to cordon off an outdoor area for which to congregate because last year the overflow spilled into the outer traffic lanes.

The total cost minus the cost of the cups and the permits comes to around $11615.00 which would be $968 per bar split amongst the 12 of you. If you get more of the non participating bars (McKenna's, Smokeeaters, Christy's, the Lion, etc) along the avenue involved, this will obviously reduce the cost per bar.
We'd like the opportunity to sit down with you and discuss the above within the next week or two, preferably Thursday February 16, 2012. Finally, the attached email is just a taste of what we receive with respect to this event:

You stated in your letter that if all things go well, you would have similar events and make it a win win for everyone. Not. A win win for the Mayfair Civic association and the bars. Definitely not a win for the neighbors who are unfortunate enough to live on the 3500 and 3400 blocks of Englewood Streets etc.

March is a horrible month and I dread it every year. Can't park in front of my house, loud drunk people, violence, litter. New thing was a van with a keg serving alcohol.
I wonder where you live? and how much you get paid for promoting these events? If you lived where I lived you wouldn't find these events a "win, win for everyone."

The drunk busses are a good idea but how about regulating those that come in their own cars. The end the night driving drunk; accidents waiting to happen!

Last year you stated that I could take part in your meetings. For what? You don't see things my way!

Mayfair Civic Association, you don't care about the residents. If you did, you would fight to end these events. Not promote new ones!!!

The Mayfair Civic Association gets nothing out of this event, however rather than complaining they are stepping up and doing something and helping regulate it.