Merry Christmas to you and your families and our wishes for a wonderful 2013 !!

Please encourage your family and friends to attend our events below - our efforts are aimed at keeping St. Hubert High School alive and well for years to come........

LOCKER DEDICATION PROGRAM - dedicate a locker in a loved one's memory or in gratitude of classmates in honor of our 70 + years of tradition - $70 will ensure an engraved plaque on your preferred locker (if possible) and provide tuition assistance - a photo will be emailed to you upon plaque installation - see alumnae website for order form
i.e.

Parent's Association presents the "Annual Fashion Show"
Save the Date !  Sunday, January 27, 2013 - with our Bambies as models of the latest fashions and prom gowns / 50+ gorgeous baskets raffled off & specials - All welcome !!  keep checking Parent's section of the website for ticket pricing, etc.

save your electronics for us (working or not, ANY item with a plug -
TV's, computer monitors, computer towers, lamps, vacuums, etc.)

Re: ​PHFA Multi-Family Underwriting Application 2013
1260 Housing Development Corporation, Philadelphia, Pennsylvania.
Stella, 2701 Holme Avenue (AKA 2723 Holme Avenue) Philadelphia, Pa. 19152
Dear Mr. Hudson:
Please accept this letter from the Mayfair Civic Association (“MCA”) as a letter of support to the Holme Circle Civic Association’s (“HCA”) Opposition to the above reference Application. In Northeast Philadelphia, our Civic Associations function as a support network for each other. When one of our groups supports a project in their boundaries, the other Civic Associations follow protocol by accepting that group’s decision. Also, when one of our groups opposes a project, we also support that decision as well. We believe that Civic Associations act as the spokesperson and watchdog for the Community and have the acute knowledge of what goes on in their Community and therefore, we respect and support their opinion in this matter.
Several items that were highlighted in HCA’s letter that concerned us:
- This group did not meet with HCA prior to the application
- Their “community support” does not include members of our Community
- The vague description of the type of housing expected. 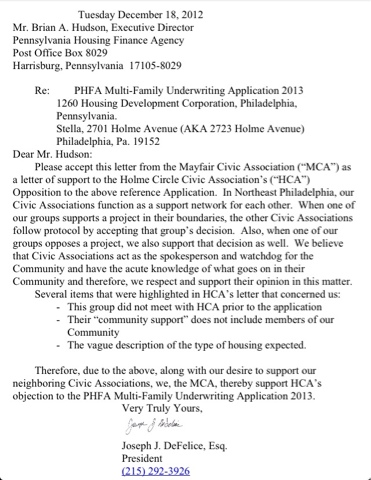 Posted by Joe DeFelice at 3:57 PM 19 comments: Links to this post

All
The Mayfair CDC is currently seeking a partner, along with Republic Bank, for its Farmers Market that will start in April 2013. As of now the plan is to do weekly markets at Cottman and Frankford through October. We had two previews, one in Sept and one in Oct, at which over 1000 people attended to enjoy wine makers, 3 farms, craft beer, live acoustic music, crafters, neighborhood businesses, etc. The $5000 sponsorship will last for calendar year and will include name on all promotional ads, fliers, banners, audio messages,etc. Please note, bank or financial institutions cannot be accepted due an agreement with Republic. Please contact Joe DeFelice, 215-292-3926/josephjdefelice@yahoo.com, or Suzann St. Marie, 267-226-2279/sstmarie1@aol.com if interested.
Thank you,
Joe DeFelice
Chairman, Mayfair CDC

Joseph J DeFelice, Esq.
215-292-3926
Sent from my Verizon Wireless BlackBerry
Posted by Mayfair Civic Association at 11:29 AM 2 comments: Links to this post

Hello Everyone!! Today is the day, our 5th Annual Live Nativity!! The weather is beautiful and we will have more animals than ever before including a cow and a 4 month old camel. We will also be collecting non-perishable food items for two local pantries. My cousin Sandy also made 200 ornaments to sell with the proceeds going to Mayfair Memorial Playground for a new 8 foot fence and a rumble slide. We will have popcorn for everyone and coloring books for the children.

Bring the family and get into the Christmas Spirit. 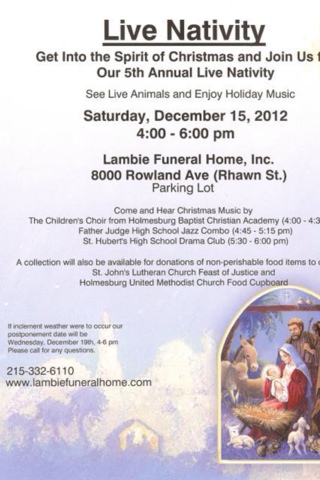 Posted by Joe DeFelice at 11:05 AM 6 comments: Links to this post 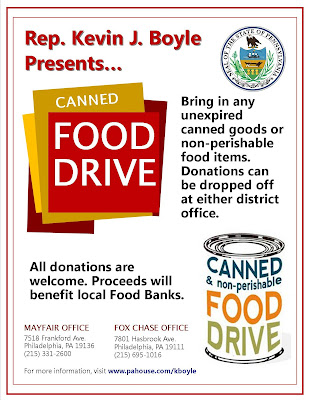 This update is written by a civic leader

who is not an attorney

The honorable Idee C. Fox heard oral arguments today in The Court of Common Pleas, regarding our victory in this case with the Zoning Board of Adjustment.  Both sides had already filed written briefs stating their case.

The attorney for The Healing Way argued that the C-2 Zoning allowed this methadone clinic "by right" under the category of Medical Clinic.  He was followed an attorney representing the City of Philadelphia who spoke in favor of THW, stating that the ZBA erred in their ruling.

Phil McPhillin and Dawn Tancredi of Mattioni Ltd.,  the attorney's representing the Appellee's (the neighbors close enough to be able to take legal action, and Councilman Henon as their (our) representative) argued that the zoning code was written before methadone clinics were a reality, and would have been, and should be regulated.  That this law requires an amendment.

Judge Fox said that she would take the comments under advisement.  It is unknown when her ruling will be made public.

There were only 10 people on our bus.  Others attended, finding their own transportation or taking time from their downtown jobs; in all about 35 people including Councilman Henon, Councilman at Large David Oh, Representative Kevin Boyle, and Representative McGheean's staff.  Senator Stack and staff were holding a press conference at a different methadone clinic.  Not the 900 people we had at Lincoln H.S.

However the Judge rules, the case will likely be appealed to the next level.

It is very much a reality that this methadone clinic can open, and the pressure must be kept on.  Your support of those opposing it must not waiver.

Posted by Mayfair Civic Association at 3:14 PM 4 comments: Links to this post

Posted by Mayfair Civic Association at 1:37 PM 7 comments: Links to this post

A message from Rich Frizzel re: our joint efforts against the Healing Way Methadone Clinic and transportation information.
Thanks
Joe
Joseph J DeFelice, Esq.
215-292-3926
Sent from my Verizon Wireless BlackBerry

From: Holmesburg Civic Association Civic <holmesburgcivic@gmail.com>
Date: Sat, 1 Dec 2012 10:48:01 -0500
To: Holmesburg Civic Association<holmesburgcivic@gmail.com>
Subject: Frankford Ave Methadone clinic hearing Wednesday 12/5
Dear members,
Please open the attache flyer.  The Frankford Ave. meth clinic will go to court next Wednesday.  We feel a presence of neighbors will be noted by the Judge.  This is courtroom, only the attorney's will speak.
Richard Frizell

Posted by Mayfair Civic Association at 10:55 AM 18 comments: Links to this post

The Mayfair Business Association (MBA), Mayfair Civic Association (MCA) and Mayfair CDC (MCDC) are excited to announce the formation of the Mayfair Christmas Village with Craft Fair and Tree Lighting.  Previously the MBA and MCA had hosted a Christmas tree lighting in various areas of our neighborhood including atCottman and Frankford along with Frusco’s Steaks Courtyard; however with public urging for a centrally located tree as well as the success of the MCDC’s Farmers Markets preview, the organizations decided to team up and put a new spin on an old classic and create a new tradition with our first ever Christmas Village.  MCDC Chairman and MCA President Joe DeFelice stated that “the addition of the Christmas Village will further add to all the great things that are already going on in Mayfair and further supplant Cottman and Frankford as a major shopping and social destination for Philadelphians and beyond.  Mayfair has long held pride in the Christmas season as it is on display on every block in our neighborhood during late November and December and we believe it is time to take that display to the doorway of our neighborhood.”

The Christmas Village will contain some of the vendors thatwere prominent at the Mayfair Farmers Market such as Stern Farms, Wild FlourBakery, Desiree’s Deserts, the Grey Lodge Pub, Cardinal Hollow Winery, GreatAwakenings Coffee Company and many more including Craft vendors such asHeadquarters Art, Pretty Cool Crochet, Steel Your Idea Wine Racks and many morevendors selling candles, ornaments, homemade baked goods, handmade jewelry,crafts and artisan goods.  MBA jack of alltrades Lisa Greco believes that this will be the finest tree lighting to dateand added that “With the success built off an ever growing Thanksgiving Parade,this Village and Tree Lighting are shaping up to be the best one ever.  We are happy to have our Parade GrandMarshalls, MCA President Joe DeFelice, Tacony Civic President Mary Benussi andHolmesburg Civic President Rich Frizell, on hand to light the tree and furtherexpound on the parade theme of Neighborhood Unity.”

Aside from the tree and the crafts, the Village will haveexciting entertainment for the children and the children at heart such as theYuletide vocals of Trish Paffen, music by other neighborhood artists, free hotchocolate giveaways and a visit by Santa and Mrs. Claus.  MCA Sgt at Arms Donny Smith believes that“this year is gonna rock.  We are alreadybecoming an entertainment hub with our Annual May Fair, events for the Childrenlike our Annual Easter Egg Hunt and weekly Pennypack Park Concerts, who will beproviding sound by the way.”