Notice Re: Cell Tower at Frankford and Wellington

Dear Neighbors,
Please accept this as notice of a Cell Phone Tower to be installed on the east side of Frankford Avenue at Wellington St (behind the Hunan Star restaurant). Originally we were contacted by the Petitioner about establishing this tower at Cottman and Frankford Aves near the northside of the bank. We, as we always do, through our Secretary, Pete McDermott, notified the Petitioner that in order to get the neighborhood's support, they would have to fill out our intake form and appear in front of the Civic Association after proper notice had been rendered to the surrounding neighbors and businesses. Shortly thereafter, Mr Orphanides, who represented the Petitioner, stated that they had secured a permit for this tower on the Eastside of Frankford Ave and Northside of Wellington St and therefore would not need to present in front of tomorrow's Civic meeting. Because cell phone towers are usually hot button issues for areas, we want to notify our neighbors that the area where this will be installed falls outside of the Civic and Business Association's boundaries and we are therefore unable to weigh-in.
However, should you have any questions in regards to this proposed tower, please forward them to us and we will pass them on to the appropriate party.
Thank you
Joe DeFelice
President, Mayfair Civic Association
Posted by Joe DeFelice at 10:04 AM 7 comments:

Todays parade was an excellent event. Everybody pitched in to make it a special event. Special thank you to Civic Board Members Lisa Greco, Pete McDermott and Donny for the all the work that was put out. Finally, an extra special thank you to Parade Chairwoman, Suzanne St. Marie, whose vision to bring the parade back to Avenue was greatly fulfilled. Great job gang and keep up the good work. Its days like these that I am proud to call Mayfair my home.

Ps. Thanks also to the Board members that marched in the parade as well (Mike, Milt and Shawn).

Festivities Kick-Off At Noon at Rhawn St. at Frankford Avenue

The Mayfair Business Association is excited to announce that the Thanksgiving Parade has returned to “The Avenue”. Last year, due to the economic climate we faced in Philadelphia and across the Country, the Parade had to be relocated and moved indoors and redubbed a “Parade of Talent”; however, thanks to the dedication of the Mayfair Business Association, with help from the Holmesburg Amateur Radio Club, the Greater Kensington String Band and countless volunteers, citizens and businesses, the Parade and its accompanying acts, brood of talent, and gaggle of dignitaries will once again strut their stuff down Frankford Avenue. First Year Parade Chairwoman, Suzanne St. Marie, who also sits on the Board of the Mayfair Business and Civic Associations, stated “It is tremendous to have the Parade back on the Avenue again. So many people came forward to make this happen, especially the Optimists who had previously organized the parade for decades before turning control over to our organization; to the businesses not only from up and down the Avenue but also from all over the region and finally to people of Mayfair, Holmesburg and Northeast Philly in general who made their wishes known that this Parade is an important staple of our community.”

This year, the Parade’s Theme is “Saluting Our Defenders of Liberty”; which is notable due to the fact that one our of own Defenders of Liberty, the Parade’s Grand Marshall, will be Kevin McCloskey, a neighborhood resident who lost both his legs fighting Operation Enduring Freedom in Afghanistan. St. Marie stated, “It was a no brainer when it came time to select a Grand Marshall. Kevin exudes what it is to be a Northeast Philly resident and grow up along the Avenue. He is the type of person our children, who will be in the viewing audience of the Parade, can look up to and call a hero.” Aside from Kevin, many dignitaries from elected officials, to Community and Business Leaders, to all different types of talent, to the great schools from our community will be represented as will be our special guest that ends the parade every year which is, in and of itself, a staple of our Mayfair tradition.

A Few Reminders: Children should bring their letters for Santa Claus. Silly String is strictly prohibited. Please do not patronize unauthorized vendors. Please remain on the curb and out of the street. Finally, this event is funded entirely through donations; please support our sponsors and try to donate at least one dollar into the donation jugs to help fund the 2011 Parade.

This event is the culmination of an exciting year for Mayfair that began with our tree lighting ceremony back in December, and delved into our Third Annual Mayfair May Fair and Second Annual Fallen Heroes Run, all of which are just another reason that Mayfair is a great place to live, work and play.

Mayfair Civic Association Teams up with Feel the Warmth

http://feelthewarmth.org/index.html
Feel the Warmth collects slightly warn coats to help keep those warm that are unable to affod a coat for themselves.  Our drop off location will be at Torresdale Flower Shop.7332 Frankford Avenue Philadelphia, PA. www.torresdaleflowers.com
Posted by Mayfair Civic Association at 2:54 PM 8 comments: 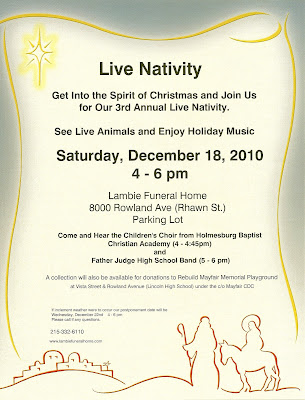 I would like to take this time to congratulate all the members of townwatch, we where recognized for the work we have done. we received the governors award on citizen crime prevention. Thank you for being involved in your community,this is proof if everyone does their part you can make a difference. this is a very prestigious award and we all should be proud.
On a sad note Lieutenant Bugieda will be leaving us. he received a promotion, I would like to thank him for all the hard work he has done is, he was a large part of getting townwatch/psa of the ground, he has been there for us every step and always was just a phone call away. I would like to ask everyone to get more involved we have a news letter to put out, fundraising,recruiting,patrolling,as well as other aspects. Please get your friends and neighbors involved. we will be doing a training in December please plan to attend. just a reminder Novembers meeting is the 15th it is a little early this month due to the holiday, I gave everyone more than a month notice on this meeting so I hope to see a great turn out.
J Vearling

Re: Appeal for Zoning Use(s) & Use Variance at 6523 Frankford Avenue

Please accept this letter as an Approval Letter, in reference to the above, on behalf of the Mayfair Civic Association (“MCA”). We have had the opportunity to meet with the owner of the above establishment and we approve of the zoning/use variance for this business. Nevertheless, Mr. Solomon has agreed to beautify and maintain the exterior & join and become an active member of the Mayfair Business Association and will support our endeavors to further the Mayfair Business environment. Please accept these as provisos set aside for the affirmation of such variance.

Re: Appeal for Zoning Use at 7701 Brous Avenue

Please accept this Letter as a Letter of No Opposition, regarding the aforementioned property, on behalf of the Mayfair Civic Association (“MCA”). We have had the opportunity to meet with the Owners, Frank & Geraldine Carmine, of this residential property.

They presented Drawings for the Proposed Addition, Comprehensive Photographs of the Site and Adjacent Properties, the Zoning Notices properly displayed, and Letters from their Neighbors, stating No Opposition to the Proposed Side Yard Addition.

Please feel free to contact us with any additional questions that you may have.

Posted by Joe DeFelice at 1:11 PM No comments:

Hello Everyone, I hope things are well with everyone. We have a general meeting for the MBA scheduled for this coming Monday, at 5:30pm, at the Perzel Center. On the agenda so far: - Mayfair/Holmesburg Thanksgiving Parade - Zoning change for newstand at Cottman and Frankford. - If you would like something added to the agenda, please email me. I hope you can make it. We have a good crew of people but we could always use more. There's strength in numbers. And we never keep you too long or waste your time. Thanks! -- Scoats Lodgemaster The Grey Lodge Pub Mayfair - Northeast Philadelphia USA www.greylodge.com "Give a man a fish and he will eat for a day. Teach a man to fish and he will spend all weekend in a boat drinking beer". -- You received this message because you are subscribed to the Google Groups "Mayfair Business Association" group. To post to this group, send email to mayfairbiz@googlegroups.com. To unsubscribe from this group, send email to mayfairbiz+unsubscribe@googlegroups.com. For more options, visit this group at http://groups.google.com/group/mayfairbiz?hl=en.
Joseph J DeFelice, Esq.
215-292-3926
Sent from my Verizon Wireless BlackBerry
Posted by Mayfair Civic Association at 3:53 PM 5 comments:

Please accept this letter as a letter of support for the Philadelphia Sports Zone. We feel this facility will be a tremendous asset to Northeast Philadelphia. Procedurally, we never weigh in on maters outside of our boundaries; however, because they have already received the enthusiastic support of the Upper Holmesburg Civic Association and we feel that this facility will impact the entire Northeast (including Mayfair) we therefore ask that you approve their application for zoning.