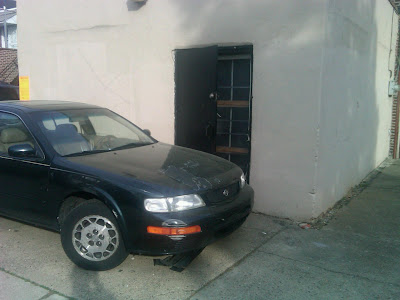 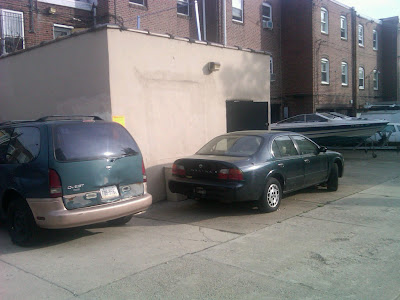 This week, through a combined effort of the Mayfair Civic Associationn, Mayfair CDC, Mayfair Business Association, the Neighbors on Unruh Ave and the Staff of City Councilwoman Krajewski, the neighborhood was able to block a zoning variance for an auto repair shop in a residential driveway in the back half of a existing nail salon. The Civic Association put in a letter and took pictures, while the neighbors circulated a petition to stop this, thus the end result was the apllicant removing the application. Below is the text of the letter along with some of the pictures:

Please accept this letter as a request to deny the application of the above for auto repair shop. This property is not conducive to handling a repair shop of this nature as it is in a residential driveway that is already in disrepair. Several neighbors, including John Vearling (President of the Mayfair Townwatch), have voiced their concern to this type of business in the location. Also, as is customary in these types of zoning issues, businesses reach out to the local community groups, such as the Mayfair Civic Association, Mayfair Business Association and Mayfair Community Development Corporation when asking for such approval, which did not happen in this case. Also, upon visit to this location, I spoke with an individual who identified himself as the son of Joseph Le. This individual stated that his father wanted to fix cars and did not seem to fully grasp the questions that I was asking him. I handed him a copy of my business card and asked him to call me if they wanted to set up a meeting. Therefore, because concern has been raised by the neighbors and the business has refused to reach out to the local community groups, we ask that you deny their zoning application.

Should you chose not to deny at this time, we ask, alternatively, that you atleast consider continuing this matter until the community has had the opportunity to meet with the above referenced business owners so as to make a more informed decision to put in front if this gracious board. On April 7, 2010, I returned to the location and took pictures of the premises. These pictures show that this is not the type of business that should be situated in this location:

1. It is in a residential driveway;

2. The front portion of the business will be a nail salon with the back being an auto repair shop;

3. There is not garage on the premises;

4. There is no room to fix cars and

5. And the driveway is in disrepair as it is and the influx of new traffic would speed up such deterioration.

Therefore, we ask that this board either deny this request or atleast continue it to a future date. Thank you.